Upon the Creative Ramps – The Best Campaigns of Retail Shopping

Retail shopping has come a long way and in recent years, the digital media has taken the industry by a storm. With the millennials and the Gen-Zers spending most of their time on mobiles, companies have started to make the time spent worth-while by ensuring quality content, quirky ads, better deals and coupons to ensure the sale happens.

The trends of 2019 are going to radically different from a brick and motor store, even an online store – the industry is heading towards a market where providing the best experience is going to be the key; where insights are data-driven, well-thought out and quirky. Through the last 365 days, these companies have been creative floating more unique ads that the rest and their campaigns have turn heads. Let's take a look at the most promoted ad campaigns

Amazon has been one of the leaders of the highest Ad spenders in all of USA only next to Apple. Amazon has spent close to $234 Million in the last 365 days, and their strategies have been much looked into, been an inspiration at a global level.

One of the most popular campaign in the last year has been the Prime Day 2018. There is a good reason for Amazon to promote their Prime Day, and thereby their Prime membership. Jeff Bezos announced that Prime Day 2017 saw maximum new membership during that time. Prime Membership of Amazon costs little over $100 while giving its customers a variety of benefits including free shipping, access to Amazon’s movie and music database. Prime Day also sales give the members additional and even exclusive deals, this incentive them, pushing more membership takers their way. These elements along with quirky advertising got millions to access their platform and purchase. 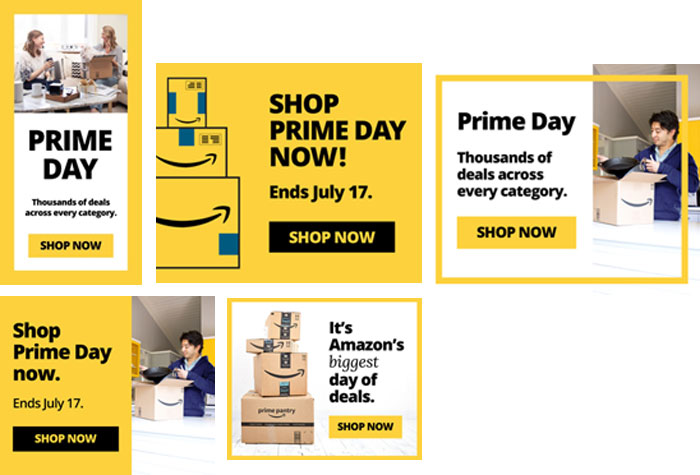 Their Prime day advertisements where set in the joyous colour of Yellow, with a distinct attention given to the Call to Action button. Amazon has spent close to $10 million on Prime day advertising alone, focus much of their effort into making animated videos that covered a wide gamut of things that are offered.

Amazon manages to float more than 2 thousand unique ads per day both Desktop and Mobile combined. The month of February seeing the most unique ads, ahead of Valentine’s day gifting spree that catches on during the month. 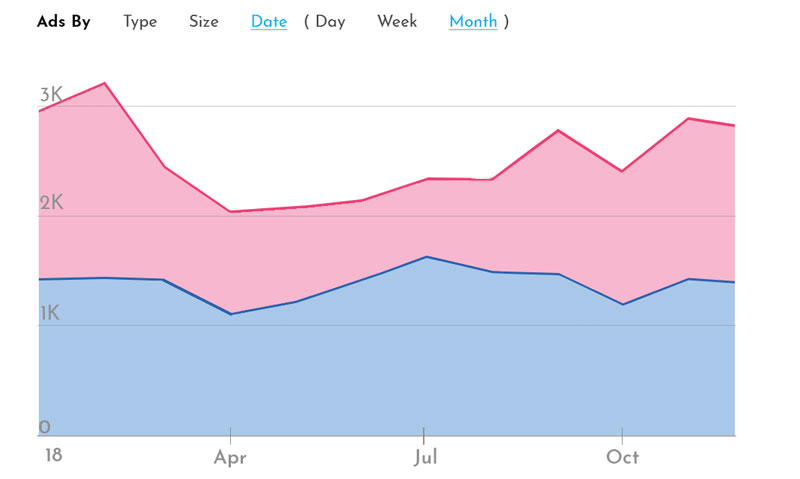 Founded in 1902, Target is currently the 8th largest departmental store in the USA, and part of the S&P 500 Index. Their ad spends in the past year stands at $43 Million, yet their unique ad count stands only next to Amazon’s at 50,000 and they are the 7th highest ad spender in the Industry.

One of their popular ad campaigns is ‘Expect More, Pay Less’ where they took to differentiating themselves by becoming “mass merchandiser of affordable chic goods”. This is the core of their Expect More Pay Less campaign. Their explorations on affordable fashion, by collaborating with fashion designers to make head-stirring attires at low prices became a huge success. Today’s version of Expect More, Pay Less has more elements added to the core focus of competitive price and chic fashion; Addition of online store, instant connectivity through apps, increased interactions between salesperson and customer, the designer and customers have made feedbacks flow seamlessly. These have a great impact in Target’s way forward.

Their ad campaign has been doing extremely well $7.3 Million ad spends which is roughly 16% of their total spends in the last one year. This is an on-going campaign and Target has utilized all types of creatives, images, videos, HTML5 etc. Their ads follow their signature bull-eye theme that sets them apart. All their advertising gives priority to the Products which in turn makes the potential customer step into their website.

Target is going on an uptrend in creating the number of unique ads. With the holiday in and people in a mood to spend, either a gift or on themselves, boosting advertisements this time of the year works well for them. Across the year on an average, they have close to 500 unique ads (Mobile and Desktop combined) floated across the internet. 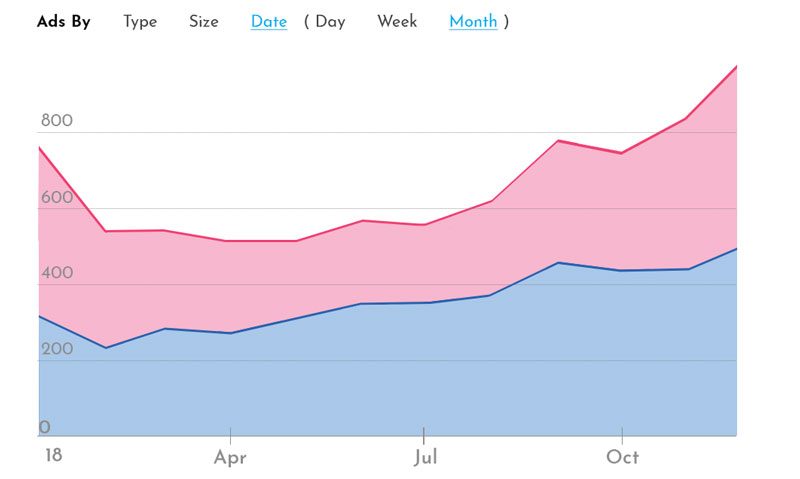 Walmart is America’s famous chain of hyper-marts and discount department stores. Founded in 1962, they have revolutionised the retail market space with unbelievably low prices, and have capitalised the segment effectively. So much so that others are unable to sustain in this variation of their business. In the last 365 days, Walmart had spent close to $62 Million towards advertising, marking them the 3rd highest Ad spender. Their unique ad count stays close to Target, but just slightly less at 49,500+ ads.

Walmart’s most promoted campaign is ‘Walmart Grocery’ where they have spent $2.2 Million which is 4% of their total ad spends in the past year. Their grocery stores stock best of the produce, pulling them from best of the locations sometimes even from across the globe. However fully knowing that giving them at unbelievable prices would put a doubt in the minds of the customers, Walmart has been threading it carefully. The aim of these campaigns is on multiple levels. Walmart promoted fresh grocery on a two-fold front – transparency and ability to discover something new. Spinning ads around empathy, Walmart has been able to traverse the grocery store offerings seamlessly. Their campaign includes images, text and Images, and videos to promote their store. Their creatives have their call to action pop up in a blue shade which provides customers with a sense of comfort. 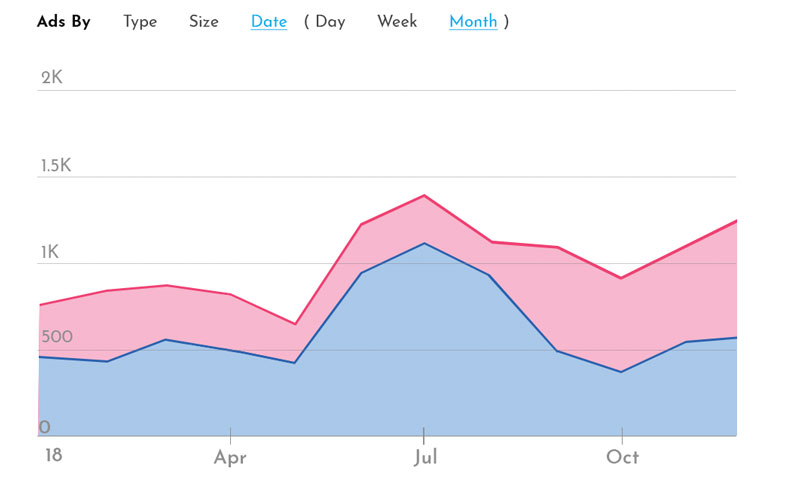 Founded in 1858, Macy’s is the popular departmental store dedicated for fashion. They are the 10th largest ad spender in the retail space. In the last year, they have spent $22 Million and their unique ad count stands at 49,000+.

Macy’s most promoted campaign in the last year revolves around their newer line of Home furnishings, especially furniture. With a global trend to diversify, they are now venturing into home sales division. Much of the attention to this campaign has been brought through by programmatic ads and naturally tapping into Google to get the promotion done. Macy’s have spent a total of $1.1 million in this year-long campaign, and much of their ads are text-based ads.

With the Black Friday sale in November, there was a spike seen in the unique ads per day by Macy’s, wherein in other days they have close to 200 unique ads floating around. 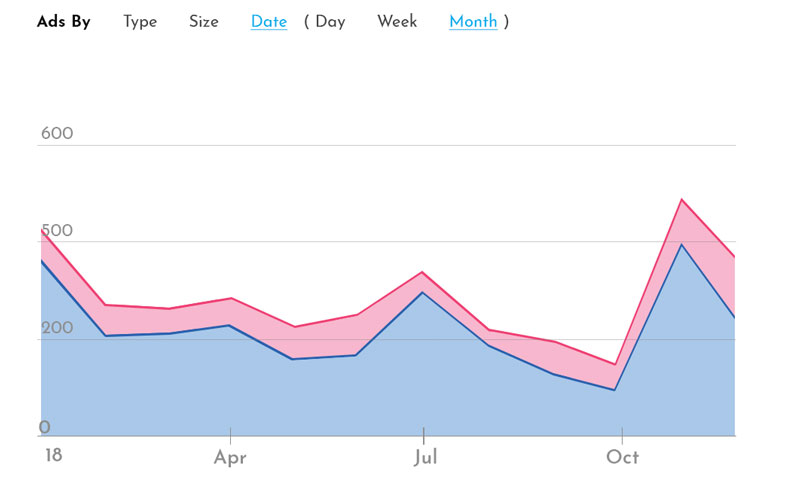 Wayfair is a game-changer in retail shopping especially furniture shopping space. Started in 2002, they sell home goods online, Naturally, they rank higher on ad spends. They stand 5th with $45 Million in the past year and they have 30,500+ unique ads online.

Wayfair is known to utilize online paid advertising and TV advertising aggressively. But what is interesting is their ideology of providing an experience when it comes to shopping. This has made them gain customers over Pottery Barn and others. Wayfair also creatively engage the Millennials and Gen-Zers through interactions on Social media. For example, whenever a picture is posted online, it gives them an opportunity for conversation and these interactions have been largely successful. Wayfair spends close to $21 Million on these aspects of advertising. Wayfair is using a variety of ads to help them promote their cause, and much of their creatives are simple and to the point. 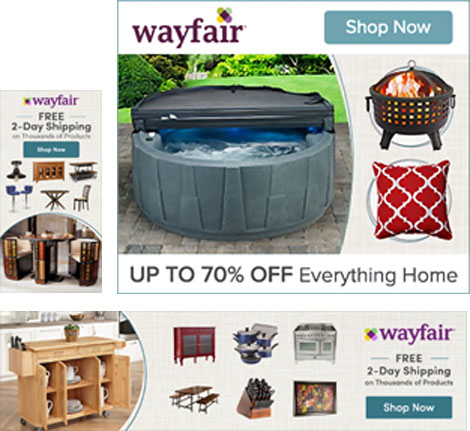 Wayfair has been having close to 500 unique ads out per day, and they effectively tap into native advertising as well. With the holiday season coming up, we can see a stark increase in unique ads per day. 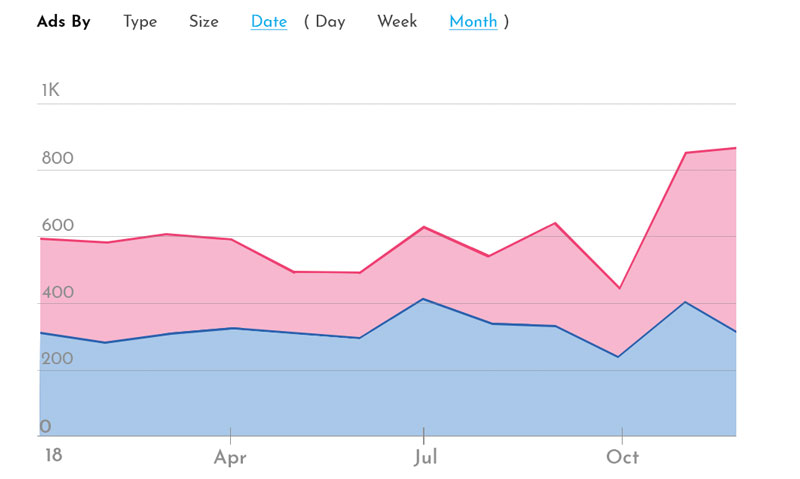 To give a sense to how much unique content is floated by this Retail industry, take a look at the graph below. 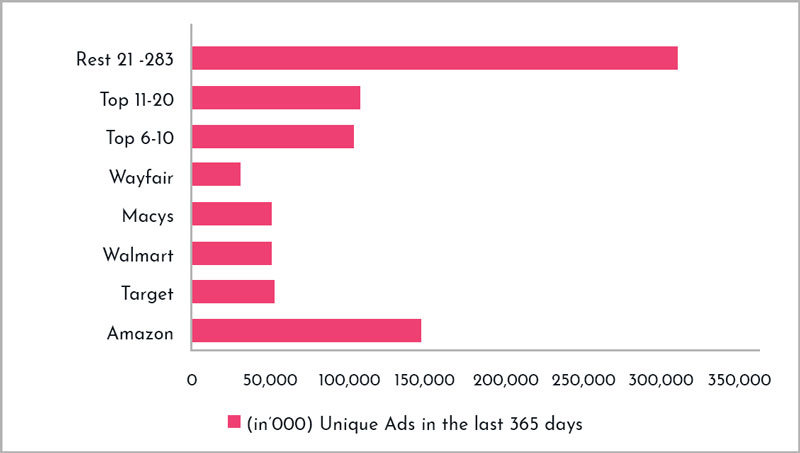 Amazon clearly leads the market with a huge yardstick. With Retail Shopping Industry going into disruptions across the sector continually, with a need to provide customized personalized shopping experience, to upgraded payment channels. While these are disruptions, the major one that is taking over the sector is the research-driven customer who seeks value in their purchases, their research includes length and breadth of possibilities before purchase. The Millennials and the Gen-Zers before buying are not just reading the reviews, suitability into their space, they also look at extreme value-addition for which all retailers are now gearing up.